Putrajaya is at once many things – the federal Government administrative centre of the nation, an award-winning green city, and a model township that’s both progressive and yet still rooted in culture.

But behind the city’s innovative architecture and scenic landscaping is the story of a city which is now about to be propelled to even greater heights, even despite its humble beginnings.

What we know now as Putrajaya was once Prang Besar, loosely translated as “Great War.”

The land was previously granted to soldiers after World War I, who transformed it from mere virgin jungle to sprawling rubber estates.

The rubber estates then went on to pave the way for the rubber cultivation scene with its contributions in bud grafting.

All this is honored in Putrajaya’s Agriculture Heritage Park, where tropical fruit trees and even an original rubber plot remains as an ode to Prang Besar’s legacy.

The Writings Of A New Chapter

With the official capital of Kuala Lumpur becoming increasingly congested, Tun Dr Mahathir (the then 4th Prime Minister of Malaysia) had envisioned a new federal government administrative centre which could help achieve greater efficiency on the backs of a growing government.

Prang Besar, with its strategic location between KL and KLIA was chosen, and Putrajaya Holdings Sdn Bhd was incorporated and assigned the momentous task of translating the vision of Putrajaya into reality.

What came next was years of development which saw entirely local engineers, architects and artisans come together to bring to life the intelligent green city that would go on to propel Malaysia onto the world stage.

Vast, open spaces aside, the city draws inspiration from Middle Eastern Architecture, and places it on the map not only as a federal government administrative centre, but as an architectural jewel as well.

With a third of the city’s 4,931 hectares designated as “green areas,” it’s far from being the dense steel-and-concrete jungle that Kuala Lumpur is known for.

It wouldn’t be apt to mention Putrajaya’s landscape without mention of its two main elements either – the Putrajaya Lake and the Boulevard. The former is a man-made wonder, which effectively serves as a natural cooling system as well as a venue for recreational purposes, and even world-class water sports activities.

Some events to recall include the 2017 SEA Games and the Asian Canoeing Championships which took place in 2005.

The Putrajaya Boulevard on the other hand, draws a grandiose 4.2km route leading from Putrajaya International Convention Centre (PICC) to the Prime Minister’s Office – Malaysia’s very own take on the famed Champs-Elysees of Paris.

A Holistic Lifestyle Made Accessible

Despite its relatively recent emergence as a federal government administrative centre, Putrajaya is certainly no barren land.

Amenities abound which make for a wholly holistic living experience in this modern city. Parks and gardens are peppered throughout the city, likewise with the multiple commercial retail units – Alamanda Shopping Centre, Ayer@8, and Nadi 15 being the main stars.

Completing the package are educational institutions which cater to all schooling levels. Be it kindergartens, secondary or primary schools, each precinct sees several Smart government schools within its borders.

Added up, they amount to over 20 secondary schools and primary schools both local and international, with a tertiary option being Heriot-Watt University.

Throw in an array of prestigious hotels like Double Tree Hilton and Everly Hotel, as well as the Putrajaya Hospital and Institut Kanser Negara, it’s easy to see that the city was clearly conceived to extend far beyond being a federal Government administrative centre alone.

Even for non-residents, Putrajaya often comes to mind for a getaway where no flight ticket is needed. The township emphasises on offering people from all walks of life the opportunity to savour a mini holiday right at their doorstep.

And the city definitely doesn’t disappoint in that respect. Not only are there ample “green” attractions from the likes of the Botanical Gardens to the Wetlands Park, but the lake itself serves as the central attraction – encouraging visitors and local residents alike to go for a stroll, boat cruise or even to indulge in the various water sport activities. 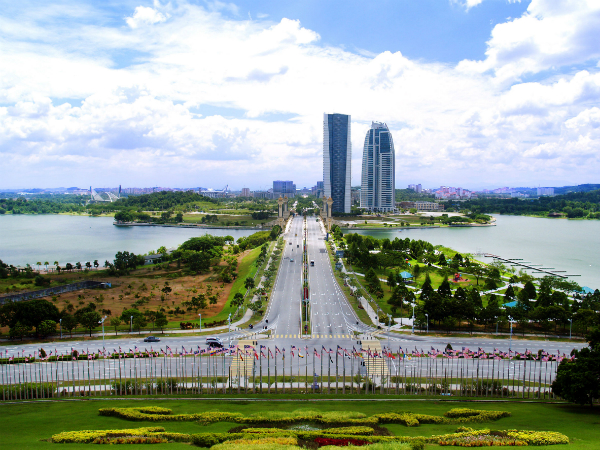 The intelligent green city also boasts of striking architecture, yet another magnet which draws visitors in. As dusk creeps up, Putrajaya’s nine iconic bridges make for an enchanting display romantically lit by LED lights.

Yet, perhaps the most distinctive feature many associate the city with is the Putra Mosque. Named after Malaysia’s first Prime Minister, Tunku Abdul Rahman Putra Al-Haj, the mosque seems to float atop the lake, its rose-hued granite dome and intricate detailing is a distinctive landmark welcoming visitors to Putrajaya.

Different But Not Divided

Barely grazing two decades of age, Putrajaya may seem to be a young city entirely separate from its neighbors.

Despite this, the city is seamlessly linked to major hotspots in the state and beyond. The dedicated Maju Expressway (MEX) links the city directly to Kuala Lumpur and KLIA, while the South Klang Valley Expressway (SKVE), North South Expressway Central Link (ELITE), North-South Expressway (PLUS), Kajang Dispersal Link Expressway (SILK), Kajang-Seremban Highway (LEKAS), and Damansara-Puchong Expressway (LDP) all make the city easily accessible from as far as Kepong.

Keeping to the city’s nature-centric theme, public transport is fairly convenient thanks to the Putrajaya Sentral transportation hub.

The hub serves as a one-stop centre connecting the KLIA Transit line via the Express Rail Link (ERL) system with a taxi centre, as well as bus hubs from Nadi Putra and RapidKL.

The upcoming MRT Line 2 Sungai Buloh-Serdang-Putrajaya (SSP) line is also set to be integrated with the station by 2023.

A Place To Call Home

While the lake and its surrounding attractions make up the city’s core, the periphery is home to a variety of residential developments. Be it high-rise condominiums or landed properties – there’s a home for everyone in Putrajaya. 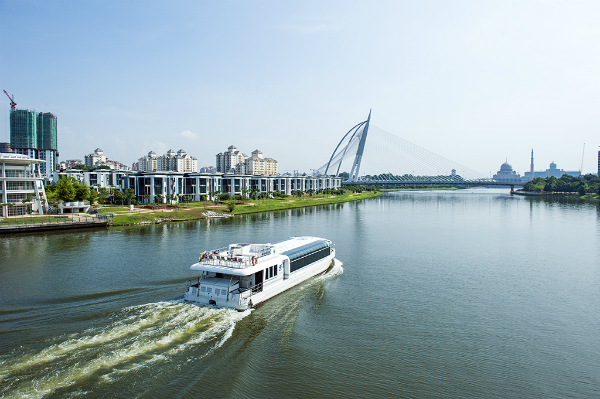 For elegant boutique villas with unobstructed views of the lake, Astana Residence in Precinct 8 makes for the ideal choice.

Among the few high-rise apartments of note include Flora Rosa in Precinct 11, an up-and-coming development which marries affordability with garden living luxury.

Forward and modern, yet serene with its abundant attractions of nature, Putrajaya is rapidly shaping up to provide more reasons for homeseekers to consider this township as a new place to call home.