The local hotel industry has laid off 4% of its employees as of March 20, with more taking unpaid leave and a pay cut as the sector buckles from the impact of the Covid-19 pandemic. 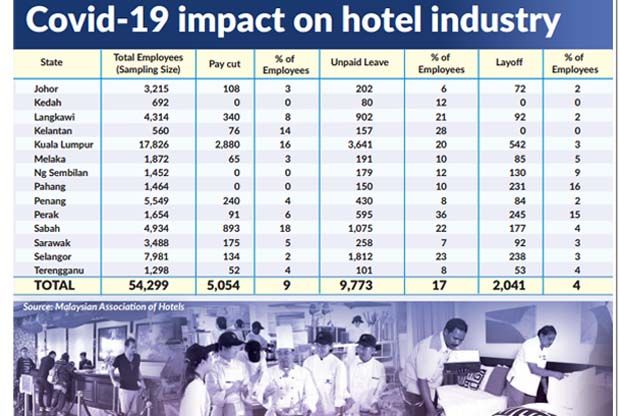 The Malaysian Association of Hotels (MAH) has projected a revenue loss of RM560.72mil for just the movement control order (MCO) period, with occupancy rates projected to fall to a dismal 11%.

Separately, the MAH said RM75.69mil in losses were recorded by the local hotel industry from Jan 22 to March 20, with a total of 193,057 room cancellations recorded during the period as a result of the pandemic.

Kuala Lumpur saw the highest number of cancellations at 61,859, resulting in a loss of RM24.91mil during the period.

Sabah was the second highest, registering losses totalling RM11.79mil as at March 20, with 33,769 cancellations during the period.

Penang registered the fourth highest number of cancellations at 18,476, resulting in losses totalling RM8.96mil as at March 20.

As for occupancy rates, with a sampling size of 94,133 rooms, the MAH said total occupancy levels stood at 32% as at March 17.

The association forecast total occupancy rates in the country to drop to 11% by the end of the month as a result of the MCO. However, it expects the levels to improve slightly, going into April, May and June at 16%, 19% and 25% respectively, as the Covid-19 crisis eases.

As at March 17, Kelantan had the highest occupancy rate at 48%, with Melaka registering the lowest at 23%. Total occupancy levels stood at 55% in January this year, before dipping to 44% in February.

Meanwhile, Malaysia Budget Hotel Association national deputy president Sri Ganesh Michiel said the budget hotels, unlike the resort-type hotels, were considered “essential services” and were doing whatever it could to accommodate the MCO.

“We are budget hotels and not the holiday-makers. Therefore it’s important for us to be there for the frontliners that are dealing with this pandemic, such as the food distributors that need to travel interstate and need a place to stay for the night.”

Ganesh said the budget hotel sector has been hit hard by the Covid-19 pandemic and called on the government to provide clearer instructions so that operations of its members are not severely impacted during this “tough time.”

“In some states, the local authorities want us to shut down by 7pm; in other words, switch off the lights and everything. But how can we do that when we have guests to accommodate?”

Ganesh added that the government should to be clear on whether its members still need to pay its employees a full salary.

“How can the business operators pay its employees a full salary if they are not making money? There needs to be clearer guidelines. During the MCO, are we to continue paying full salaries, partial salaries are do we ask our employees to take unpaid leave?”

He added that despite the MCO, online platforms such as Airbnb are still not properly regulated.

On the global front, the hospitality industry is being severely impacted by the Covid-19 pandemic, with up to four million hotel job cuts expected in the United States alone in the coming weeks.

Citing the American Hotel and Lodging Association (AHLA), Forbes reported on Monday that the AHLA expects 44% of all hotel workers to lose their jobs in the coming weeks due to a fallout from the pandemic.

“The impact to our industry is already more severe than anything we’ve seen before, including Sept 11 and the great recession of 2008 combined, ” the AHLA president and chief executive officer Chip Rogers was quoted as saying.

According to the Wall Street Journal, the Marriott, Hilton and Hyatt were already “furloughing tens of thousands of workers”, while the Washington Post reported that Trump Hotels is closing at least four properties, with three hotels laying off staff.