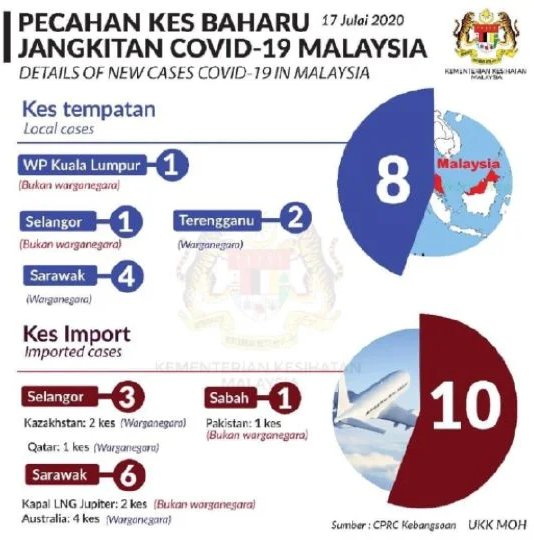 Dr Noor Hisham said the index case of Pitakwa PUI cluster was a Malaysian, case 8,737, who returned from Nigeria on July 11.

“Case 8,737 was tested negative at the Kuala Lumpur International Airport (KLIA), but was confirmed infected with Covid-19 when had a repeated test three days later after showing symptoms.

“Forty four close contacts were identified, including the family members, passengers and crew members who took the same flight, a taxi driver and co-workers.

“From the 44 samples, two have been confirmed positive (case 8,754 and case 8,755) three were negative and results for the remaining 39 samples are still pending,” he said in a statement today.

Index case of Shirala PUI cluster is an expatriate, case 8,730, who arrived in Malaysia on July 6.

“The result of the Covid-19 test at India and KLIA came out negative, but a second test on July 11 following symptoms turned out positive.

“Two close contacts were identified, one was found positive (case 8,738) and another one was negative,” he said.

“Index case of the Jupiter cluster is a non-Malaysian cruise member who has travel history to Japan and Singapore. Case 8,723 starting to show symptoms on July 3 and his condition deteriorated on July 11 when the cruise was in Sarawak waters.

“The patient was taken to a medical centre for Covid-19 test and was confirmed positive, and later transferred to Bintulu Hospital for treatment.”

He said 29 close contacts were identified, where two were confirmed positive and the remaining were negative.

Dr Noor Hisham said the cluster was an isolated cluster and ensured that the community was not exposed to the cruise member.

He added further screenings and investigation were still underway for all four clusters.

Malaysia daily new Covid-19 cases are back to double digits today, with 18 cases recorded overnight, bringing the total of confirmed cases to 8,755.

Three were allowed to discharge from hospital and no new death has been reported.