A Malaysian today tearfully recounted the hellish experience of trying to evade falling rocks during a landslide triggered by an earthquake on Lombok island in Indonesia.

How Geok Lan said she and a group of former schoolmates, who were of the 1963 batch from SJKC Jementah in Johor, were at a waterfall when the earthquake struck last Sunday and killed two of her companions. 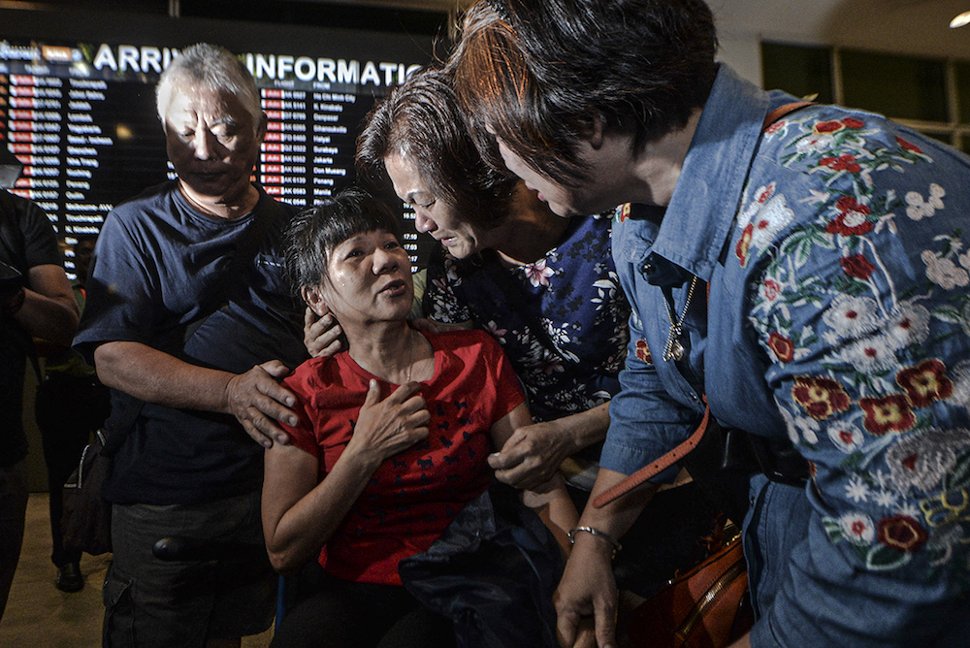 Malaysian victim of the Lombok earthquake, How Geok Lan (in red), is greeted by her former schoolmates of the same batch born in 1963 after arriving at klia2 in Sepang March 19, 2019. — Picture by Shafwan Zaidon

Asked to describe her feelings now upon her return to Malaysia, the 56-year-old woman told reporters: “I feel that it is as if we came out from the gates of hell.

“Because when the quake happened, the rocks all appeared to fly down from the sky.”

How said her fellow schoolmate, Sin Chew Daily deputy executive chief editor Datin Tai Siew Kim, was standing in the middle and was immediately struck by rocks on the head.

“She was struck by rocks and severely hurt. She fell down another side. All of us were not able to save her. 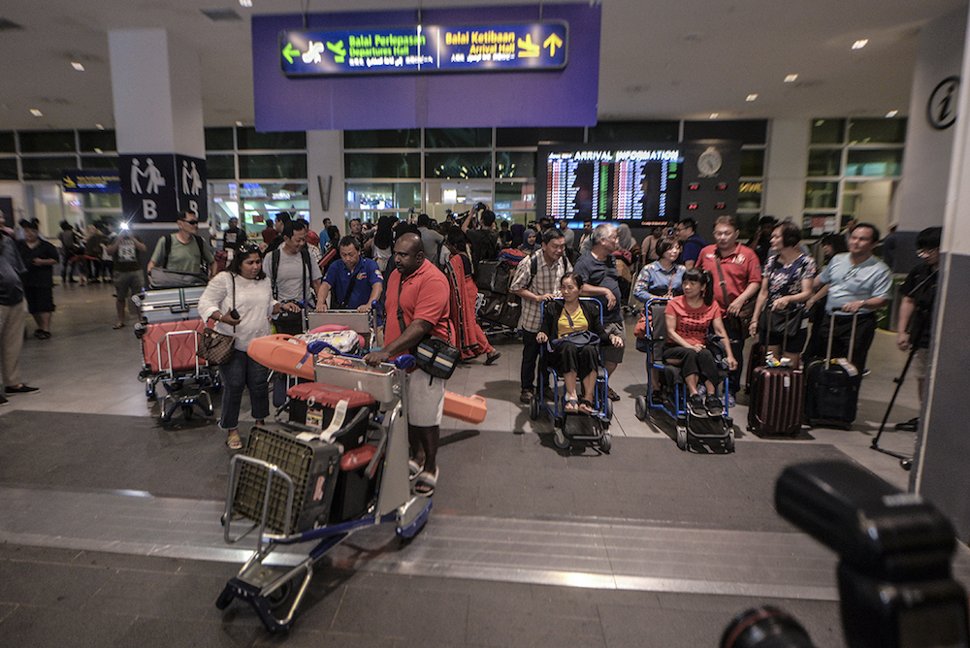 Some of the Malaysian victims of the Lombok earthquake arrive at klia2 in Sepang March 19, 2019. — Picture by Shafwan Zaidon

“Her son went over to see, he said no, his mother cannot be saved, (she) laid there,” she said when recounting the incident.

As for fellow schoolmate Lim Sai Wah, who has since died, How said they were also unable to help her.

“There was a very, very big rock that could not be moved, she could not rise up. Her body could move… she only used her hand to shout for help, we went over… Sai Wah was there, actually she could still speak,” she said.

As How mostly spoke in Mandarin, it is unclear if multiple rocks struck Tai and Lim, who were both aged 56.

How, who is a Kuala Lumpur resident, said that the rocks mostly struck those standing in the middle.

How, who was standing to the side at the scene, said she had the lightest injuries among the seven who were injured as she could still rise and stand on her own. Her injuries were to her back, her leg and hand.

How said about seven were stuck at the waterfall area and had to wait for help that come about one hour later, while over 10 others who could leave left the place.

The ordeal has stuck with How, who said: “I still keep thinking about it. That image is very terrifying.” 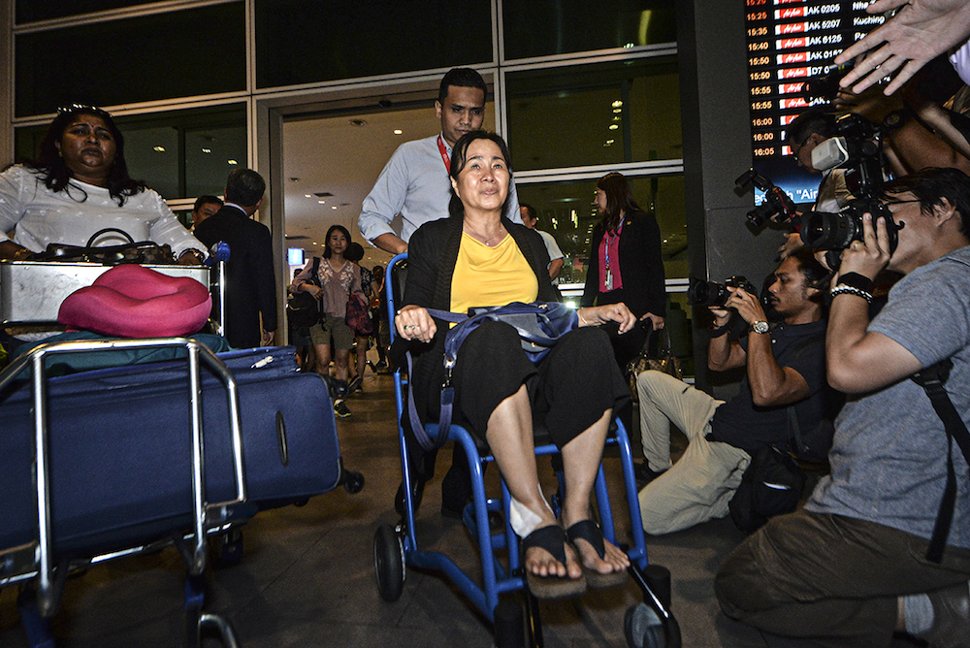 How was among 17 Malaysian quake victims who arrived at the klia2 airport this afternoon at around 3.30pm from Lombok.

Fellow survivor Ong Lee Jye, also 56, spoke of how the schoolmates were unable to save Lim.

“She was with me on the hill, she was not far from me, I ran off to the stream opposite, she didn’t run over here. She ran to another side, her husband was unharmed.

“She could not be saved, because she was pressed down by rocks, we moved a rock, the rock was too big, we couldn’t help her,” she said, adding that Lim lost her life eight hours later due to excessive loss of blood.

Ong, who is based in Ipoh, said medical aid took some time to reach the group, noting that her trip uphill before the quake had itself lasted about 40 minutes.

Ong, whose leg was injured, had a minor surgery in Indonesia yesterday.

Fellow classmate Cheong Kim Leong, who escaped the quake unhurt, did not go up to the Tiu Kelep Senaru waterfall on the fateful day but had stayed back at the hotel with his wife and his two relatives. 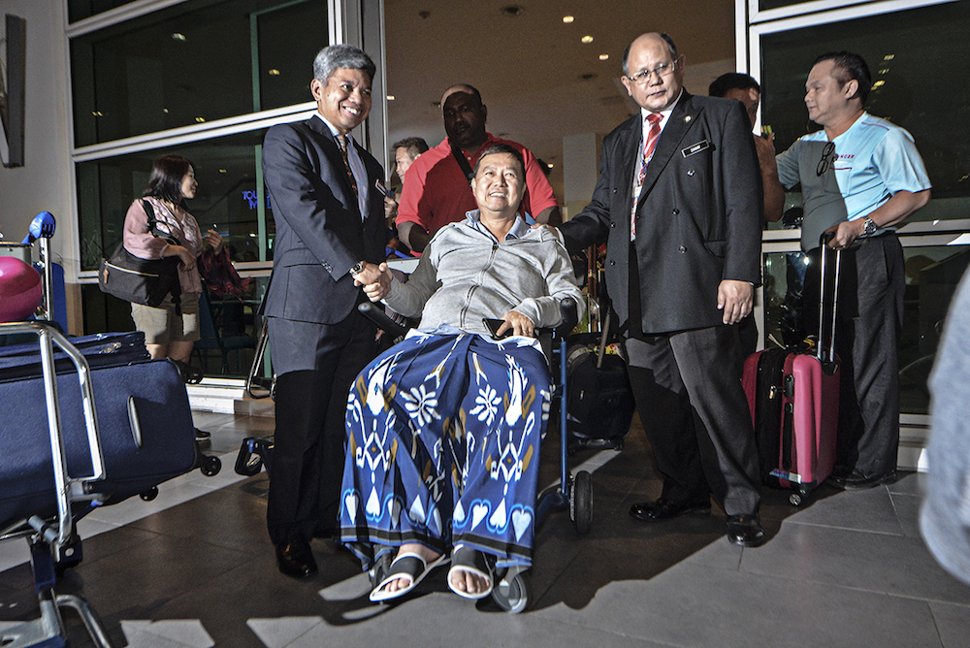 “Not really, actually I hope I was there, I can help them,” the Johor Baru-based resident told reporters when asked if he felt fortunate that he had stayed back.

Having experienced an earthquake once in Tokyo where people there were relatively calmer, Cheong said he is willing to return to Tokyo but not to visit Lombok again.

Fellow survivor Jason Phang Tin Fan, who lives in Subang Jaya, said he was happy to be back in Malaysia.

“I was hit by rocks, had some injury to the back, waist, leg and head, but luckily it was small rocks, but everything is ok,” he said.

Foreign Ministry’s Deputy Secretary General (Bilateral Affairs) YM Raja Nushirwan Zainal Abidin were among those who welcomed the survivors back.

On March 17, a 5.8-magnitude quake rocked Lombok Island at 2.07pm (3.07pm Malaysian time), resulting in a landslide that killed the two Malaysians and injured several others. There was also an aftershock of 5.2 magnitude.

The bodies of the two deceased were expected to arrive at 5.10pm at KLIA, with their family members understood to be on the same flight.