klia2 has been cleared of any trace of the VX nerve agent and declared safe following an early-morning sweep.

Police have confirmed that the low-cost carrier terminal where the murder of Kim Jong-nam took place is free of the toxin.

From the screening conducted jointly by the Atomic Energy Licensing Board (AELB), Fire and Rescue Department and police, no traces of VX were found.

Confirming this, Selangor police chief Comm Datuk Seri Abdul Samah Mat said they made the call to conduct the screening for hazardous materials following the Chemistry Department’s findings that the chemical compound was used in the killing.

Jong-nam, the estranged half-brother of North Korea’s Supreme Leader Kim Jong-un, is believed to have been fatally poisoned by two women at klia2 on Feb 13 as he was set to fly to Macau where he lived in exile. 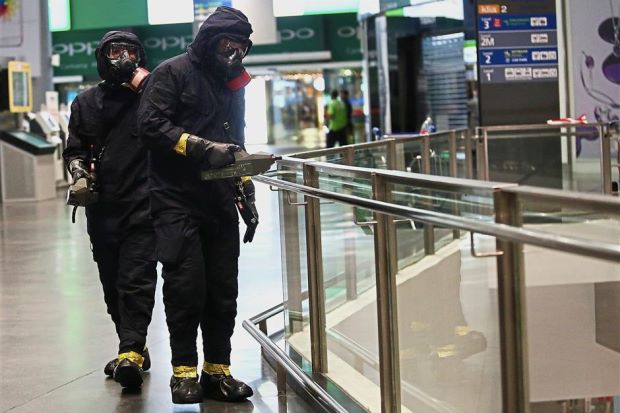 Safety measures: Police and other agencies conducting a joint sweep of the path Jong-nam took after the Feb 13 attack at the KLIA2 departure terminal. — IZZRAFIQ ALIAS/The Star

Police announced on Feb 24 that the liquid that was smeared on Jong-nam’s face was the VX nerve agent, a deadly chemical classified by the United Nations as a weapon of mass destruction.

Comm Abdul Samah said the joint operation, carried out by the police forensic team, AELB and the Hazmat (hazardous materials) unit of the Fire and Rescue Department, started at about 1.45am yesterday and ended about an hour later.

“Based on our screenings, we have come to three conclusions: there are no hazardous materials detected, KLIA2 is free of any form of contamination, and the airport is declared a safe zone,” he told reporters at the airport yesterday.

Comm Abdul Samah said the sweep was performed as a precaution after the nerve agent was identified last Friday.

“We decided to do it at 1.45am as the airport was less busy with fewer people then as we did not want to cause any unnecessary alarm,” he said.

Those who attended to the victim after the attack had also undergone examination.

He said the Indonesian suspect Siti Aisyah, who had vomited in the taxi immediately after the attack, has not shown any symptoms in police custody currently.

She was nabbed three days after the assassination.

On the raid conducted at a condominium in Jalan Klang Lama, Kuala Lumpur, on Thursday, he said police believed the unit had been rented by the four suspects who fled the country after the incident.

“We took samples and sent them for analysis but we cannot announce what the substances are. But they are related to the four main suspects,” he said.

The police, he added, are still investigating if the nerve agent was manufactured in the country or smuggled in.

The four – Rhi Ji-hyon, 33, Hong Song-hac, 34, O Jong-gil, 55, and Ri Jae-nam, 57 – are believed to have masterminded the lethal attack. Sources said they left Kuala Lumpur on Feb 13 right after the killing for Jakarta, then to Dubai and Vladivostok (Russia), before reaching Pyongyang.