RESIDENTS in the sprawling new township of Bandar Seri Sendayan near Seremban will have more reason to cheer as popular fast food restaurant Kentucky Fried Chicken will be opening its doors for business by next October. 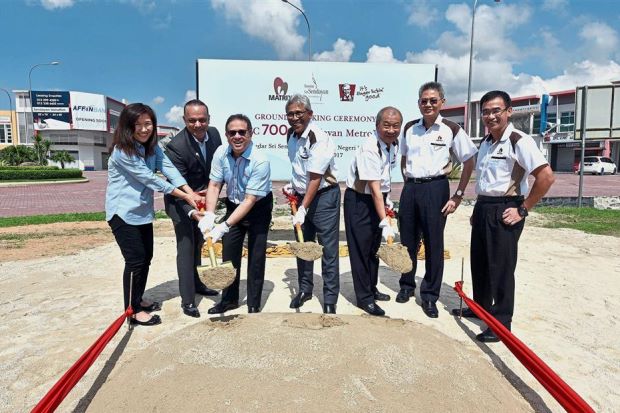 The outlet, KFC’s 700th nationwide, will be located on a 0.4ha plot and just opposite d’Sora Boutique Business Hotel at Sendayan Metro Park.

QSR Brands is the franchise holder for both KFC and Pizza Hut outlets nationwide while Matrix Concepts is the developer of the Bandar Seri Sendayan township.

Mohamed Azahari said the company decided to open an outlet here due to its strategic location.

“There is a lot of potential for growth in BSS and I personally feel that it will be like what Shah Alam is to Selangor.

“This is an integrated and modern township with great connectivity and with more people moving here, it makes good sense to set up operations here,” he said adding that its proximity to KLIA and klia2 was another advantage.

“We will be working with Matrix Concepts and see how we can make our new store environmentally friendly.

“We must have the basics such as being able to use solar energy and LED lighting and do our bit for the environment,” he said adding that the new KFC outlet would be the second to have such facilities after its store in Nilai which was opened about three years ago.

Mohamed Azahari said from Jan 1 next year, all Kentucky Fried Chicken and Pizza Hut outlets nationwide will also have wi-fi facilities as it aspires to serve its customers better.

Patrons will also be able to pay for their meals using credit cards, via the contactless payWave method or digitally through e-wallet.

This, he said, was also in line with the group’s initiative to embrace technology.

“We will be collaborating with Telekom Malaysia to make this possible and provide our customers with better service.

“We want our customers to be able to enjoy that connectivity while enjoying our finger-licking good meals,” he said adding that its existing KFC and Pizza Hut outlets received some 20 million customers per month.

Mohamed Azahari said by the end of this year, the group would have opened 1,060 stores nationwide. Of these, 706 will be KFC outlets.

Earlier, Mohamad Haslah said QSR Brands’ decision to open an outlet in Bandar Seri Sendayan was excellent as the new township would soon become the “epicentre for growth” in Negri Sembilan.

“We now have about 30,000 people living in this new township and another 20,000 in the surrounding areas.

“The Royal Malaysian Air Force Academy is also scheduled to be opened in March and we will have many more people moving in to Sendayan then,” he said.