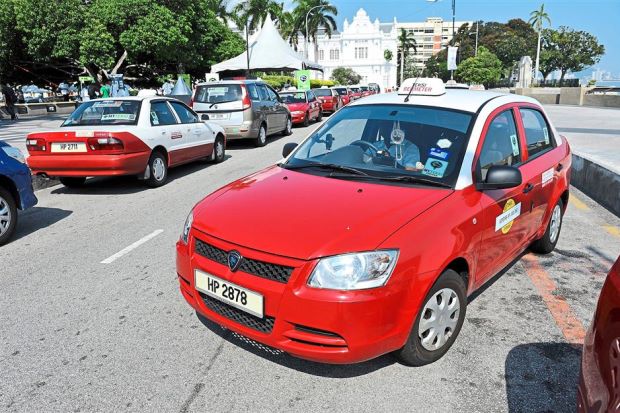 Working out the fare hike

The meters for normal budget taxis are now clocking 10 sen for every 115m. When recalibrated with the new fares, they will register 25 sen per 200m.

The new rate for Penang is jacked up by 72% to RM1.50 per kilometre, partly due to the unavailability of natural gas vehicles (NGV) on the island, and also the widespread practice of not using meters.

Interestingly, the price of NGV had remained at 68 sen per litre since 2005 but will be raised by 54% to RM1.05 per litre from September.

As all new budget taxis will be migrated to Teksi 1Malaysia (TEKS1M) using the Proton Exora, SPAD has taken into account the higher cost of operation.

The rates for TEKS1M in the Klang Valley and Johor are RM1.50 per km and RM1.75 in Penang.

As for distance, the meters for normal budget taxis are clocking 10 sen for every 21 seconds, and when recalibrated, they will register 25 sen after 36 seconds in stationary traffic.

It is similarly higher for TEKS1Ms in the Klang Valley and Johor, at RM30 per hour and RM35 per hour for Penang.

Executive taxi fares are maintained at RM2 per km and RM34.28 per hour.

As all new metered taxis will be TEKS1M using the Proton Exora, executive taxis are being phased out as their current permits expire.

Hired cars are non-metered taxis that not only travel outstation but also within many smaller cities and towns.

The number of metered taxis outside the Klang Valley, Johor and Penang is only 116 units.

As the number of metered taxis is 40,043, it will take several weeks for taximeter companies to recalibrate all of them.

After recalibration, the taxis must be sent to Puspakom to test and certify them for use.

The queues will be long and technicians of taximeter companies will be working late into the night.

Drivers who send in their taxis late would have to accept payment as recorded by the meter and would be committing an offence to ask for more.

Cabbies in the Klang Valley opera­ting normal budget taxis should be happy with the new rate of RM1.25 per km and RM25 per hour, an increase of 44% and 46% respectively.

Likewise, TEKS1M operators should be delighted with the RM1.50 per km and RM30 per hour, a rise of 72% and 75% respectively.

However, the public should not be surprised if some cabbies continue to cite traffic jam for not going to a destination.

Such excuse is a legacy of the past when meters were clocking only RM8 per hour prior to August 2009.

With the MeterOn app scheduled for launching on March 25, taxi drivers can easily be hauled up for giving such an excuse.

If they plan to refuel or need a meal, rest or toilet break, they’d better explain politely instead of answering rudely.

It is normal for all of us, and not just taxi drivers, to do anything we like when we know we can get away with it.

As such, no amount of training can change anything if the ecosystem is not in place.

For example, adequate training is given to our uniformed personnel but those who are corrupt are anything but patriotic.

The most effective measure to catch up with errant cabbies is through the use of technology, and the MeterOn app looks promising.

But the standard of taxi service is also dependent on the passengers and not just the drivers and the authorities.

Passengers who sheepishly open the front passenger door to ask are indirectly offering the driver a choice to accept the trip or quote a fare.

Likewise, those who do not report errant cabbies are actually emboldening them to continue.