Malaysia’s newest airline Rayani Air is now set to fly after it received the Air Service Licence (ASL) and Air Operator’s Certificate (AOC) from the Department of Civil Aviation (DCA). 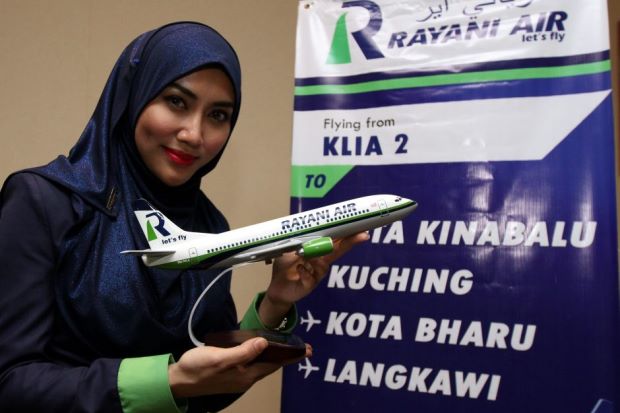 Calling itself “the first Syariah-compliant” airline in Malaysia, Rayani Air will be using the Langkawi International Airport as its home base.

“The DCA has done a thorough audit on the airline and we are pleased to say that it has fulfilled all our requirements,” said Azharuddin after the handover.

As a “syariah-compliant” airline, its Muslim crew are required to wear the hijab.

Food and beverages served will all be halal-certified.

There will be no alcohol served on-board as well.

There will also be doa recitals before every flight.

“We are the first Malaysian airline to be syariah-compliant based on guidelines by relevant authorities. We are proud of this.

“The syariah-compliant aspects will be refined as time goes by,” said Jaafar.

He added that Rayani Air was not a budget airline, but full service airline similar to Malaysia Airlines.

Rayani Air’s first flight, or its “homecoming”, will be tomorrow, flying from klia2 to Langkawi.

The airline will utilise two Boeing 737-400 aircraft for its first phase before expanding.

It is planning to expand internationally to Asia Pacific routes like South-east Asia, China, Australia as well as the Middle East.