Whisky brand Monkey Shoulder showcased a unique pop-up activation with the promotion “Take Home a Monkey Today” at Kuala Lumpur International airport 2 (klia2). The promotion also fell in line with the upcoming Chinese New Year 2016, the Year of the Monkey. 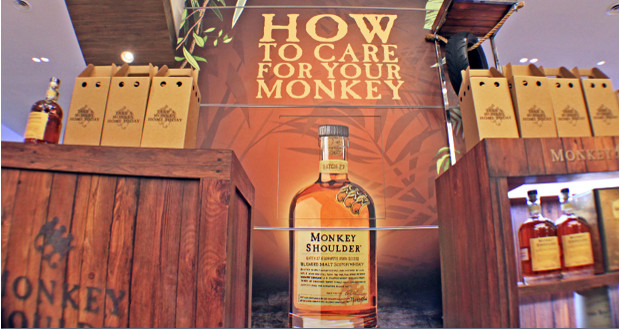 At klia2 arrivals, Monkey Shoulder ran the theme “How to Care for your Monkey” from October 10 to October 31, with an aim to encourage blended whisky drinkers to trade up to premium malt whisky and encourage bourbon drinkers into the malt market.

The whisky is made by combining small batches of single malts from three of Speyside’s finest distilleries, which won “Best Scotch Whisky Aged 20 Years and Under” in the International Spirit Challenge 2015, and said it is making “rapid ground” in the travel-retail market.

Monkey Shoulder representatives at the stand offer samples of the edition to travellers, and those that approved of the taste were, in jovial fashion, given campaign stickers.

With each purchase of a Monkey Shoulder bottle, travellers received a “mini-monkey”, a 50ml miniature Monkey Shoulder, along with their one-litre bottle packed in a take-away brown carton box with breathing holes that emulate taking a pet monkey home.

Commenting on the brand activity, APAC Travel Retail director Scott Hamilton said: “While consumer interest in Single Malt Whisky has picked up considerably, the Blended Malt Scotch Whisky category is growing faster as it bridges deluxe blended scotch drinkers into the world of malt whisky. We are anticipating further interest in the Monkey Shoulder brand once Chinese New Year 2016, the Year of the Monkey swings in.”