Be prepared to pay more for your public transport. The increase in taxi fares takes immediate effect while train and express bus charges will be raised on May 1 and May 15 respectively.

Budget taxis in the Klang Valley and Johor Bharu will charge 25 sen per 200m and 25 sen per 36 seconds although the flagfall will remain at RM3 for the first kilometre.

For example, a budget taxi that is stuck in traffic for an hour will take in RM25 (RM30 for those in Penang) from time-based charges alone, up from RM16.80 previously. This is likely to make taxi drivers more willing to face congestions. 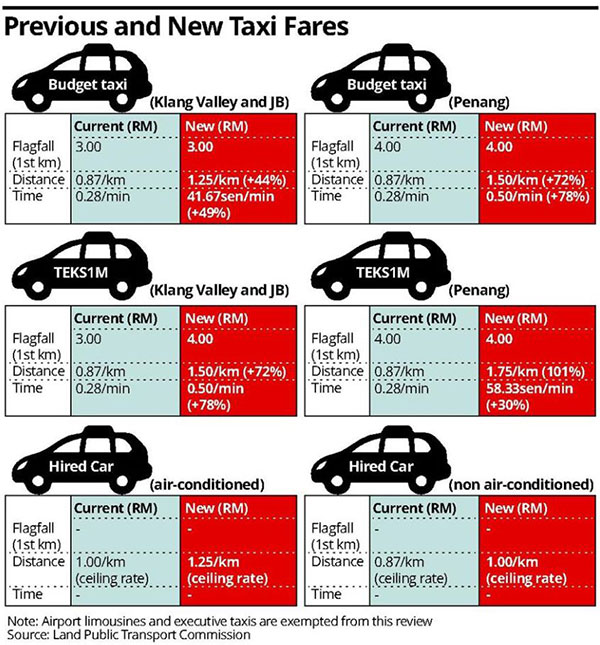 “We took into account the needs of the operators and the public (in coming up with these new fares),” he told reporters at SPAD headquarters here.

Teksi 1Malaysia (TEKS1M) cabs – consisting exclusively of the brown Proton Exora – are the only taxis to have the flagfall rate raised from RM3 to RM4.

The hike in taxi fares does not cover airport limos and executive taxis (typically blue in colour), and is limited to Peninsular Malaysia.

According to SPAD, taxi fares would be reviewed each year based on operating cost changes.

Although the increase in fares took immediate effect, taxis could only charge the new rates after the meter had been recalibrated.

SPAD chief executive Mohd Nur Ismal Mohd Kamal said it would take one to two months for all taxis to use this new setting.

“There’s a panel of service providers they can go to. We have asked them to increase (operating) capacitym,” he said.

SPAD said that senior citizens, the disabled and children below 12 years old would continue to enjoy the 25% discount on express bus fares.

Mohd Nur said the fares of stage buses would not be increased now or in the near future.

“This is because low-income earners rely on stage buses for transport, and they cannot afford to pay more,” he said.

He added that the Government would cover stage bus costs.