The search for a missing AirAsia jet carrying 162 people that disappeared more than 24 hours ago on a flight from Indonesia to Singapore resumed with first light Monday. 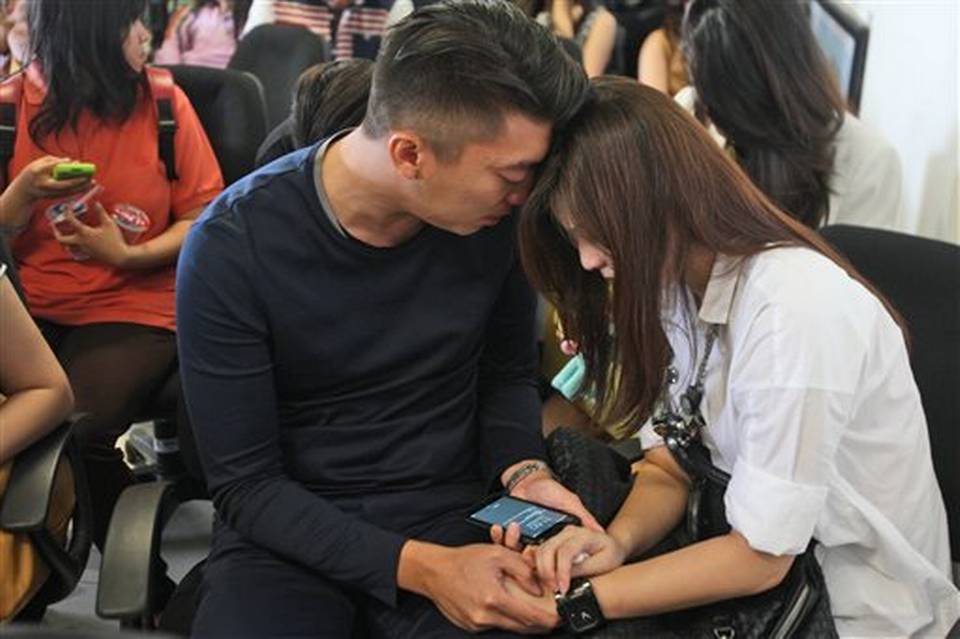 Relatives of the passengers of AirAsia flight QZ8501 comfort each other at Juanda International Airport in Surabaya, East Java, Indonesia, Sunday, Dec. 28, 2014. The AirAsia plane with 161 people on board lost contact with ground control on Sunday while flying over the Java Sea after taking off from a provincial city in Indonesia for Singapore, and search and rescue operations were underway. TRISNADI AP PHOTO

First Admiral Sigit Setiayana, the Naval Aviation Center commander at the Surabaya air force base, said that 12 navy ships, five planes, three helicopters and a number of warships were talking part, along with ships and planes from Singapore and Malaysia. The Australian Air Force also sent a search plane.

Setiaya said visibility was good. "God willing, we can find it soon," he told The Associated Press.

AirAsia Flight 8501 vanished in airspace thick with storm clouds on its way from Surabaya, Indonesia, to Singapore. Searchers had to fight against heavy rain on Sunday before work was suspended due to darkness. 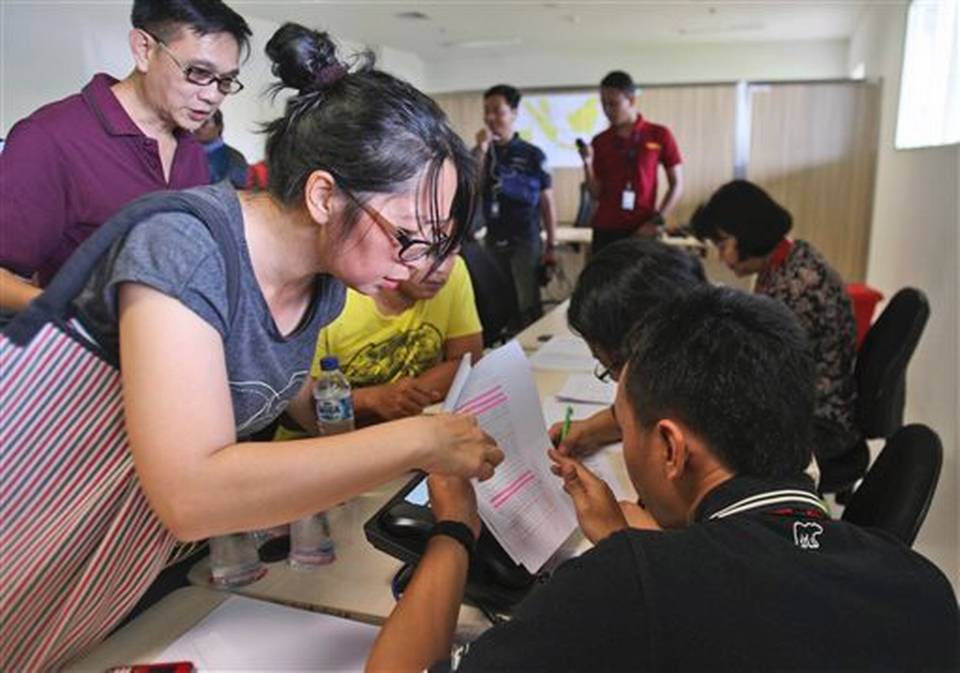 Relatives of the passengers onboard AirAsia flight QZ8501 check the plane's manifest at a crisis center set up by local authority at Juanda International Airport in Surabaya, East Java, Indonesia, Sunday, Dec. 28, 2014. The AirAsia plane with over 160 people onboard, lost contact with ground control on Sunday while flying over the Java Sea after taking off from the provincial city in Indonesia for Singapore. |Trisnadi AP Photo

At the Surabaya airport, passengers' relatives pored over the plane's manifest, crying and embracing. Nias Adityas, a housewife from Surabaya, was overcome with grief when she found the name of her husband, Nanang Priowidodo, on the list.

The 43-year-old tour agent had been taking a family of four on a trip to Singapore, Malaysia and Indonesia's Lombok island, and had been happy to get the work.

Nearly all the passengers and crew are Indonesians, who are frequent visitors to Singapore, particularly on holidays.

The Airbus A320 took off Sunday morning from Indonesia's second-largest city and was about halfway to Singapore when it vanished from radar. The jet had been airborne for about 42 minutes.

There was no distress signal from the twin-engine, single-aisle plane, said Djoko Murjatmodjo, Indonesia's acting director general of transportation.

The last communication between the cockpit and air traffic control was at 6:13 a.m. (23:13 GMT Saturday), when one of the pilots "asked to avoid clouds by turning left and going higher to 34,000 feet (10,360 meters)," Murjatmodjo said. The jet was last seen on radar at 6:16 a.m. and was gone a minute later, he told reporters.

Indonesia, Singapore and Malaysia launched a search-and-rescue operation near Belitung island in the Java Sea, the area where the airliner lost contact with the ground.

AirAsia group CEO Tony Fernandes flew to Surabaya and told a news conference that the focus for now should be on the search and the families rather than the cause of the incident.

"We have no idea at the moment what went wrong," said Fernandes, a Malaysian businessman who founded the low-cost carrier in 2001. "Let's not speculate at the moment."

Malaysia-based AirAsia has a good safety record and had never lost a plane before.

"This is my worst nightmare," Fernandes tweeted.

But Malaysia itself has already endured a catastrophic year, with 239 people still missing from Flight 370 and all 298 people aboard Flight 17 killed when it was shot down over rebel-held territory in Ukraine.

AirAsia said Flight 8501 was on its submitted flight plan but had requested a change due to weather.

Sunardi, a forecaster at Indonesia's Meteorology and Geophysics Agency, said dense storm clouds were detected up to 13,400 meters (44,000 feet) in the area at the time.

"There could have been turbulence, lightning and vertical as well as horizontal strong winds within such clouds," said Sunardi, who like many Indonesians uses only one name.

In such cases, pilots have plenty of time to find a way around the storm cluster or look for gaps to fly through, he said.

"It's not like you have to make an instantaneous decision," Cox said. Storms can be hundreds of miles long, but "because a jet moves at 8 miles a minute, if you to go 100 miles out of your way, it's not a problem."

It was unclear based on comments from authorities what air traffic controllers saw on their screens when the plane disappeared from radar, he noted.

The plane had an Indonesian captain and a French co-pilot, five cabin crew members and 155 passengers, including 16 children and one infant, the airline said in a statement. Among the passengers were three South Koreans, a Malaysian, a British national and his 2-year-old Singaporean daughter. The rest were Indonesians.

At Surabaya airport, dozens of relatives sat in a room waiting for news, many of them talking on mobile phones and crying.

Dimas, who goes by one name, said his wife, 30-year-old Ratri Sri Andriani, had been on the flight to lead a group of 25 Indonesian tourists on a trip to Singapore and Malaysia. He was holding out hope that the plane had made an emergency landing.

"We can just pray and hope that all those aboard are safe," said Dimas, who was surrounded by Ratri's parents and friends at the airport crisis center.

The missing aircraft was delivered to AirAsia in October 2008, and the plane had accumulated about 23,000 flight hours during some 13,600 flights, Airbus said in a statement.

The aircraft had last undergone scheduled maintenance on Nov. 16, according to AirAsia.

The airline, which has dominated cheap travel in Southeast Asia for years, flies short routes of just a few hours, connecting the region's large cities. Recently, it has tried to expand into long-distance flying through sister airline AirAsia X.

Fernandes, who is the face of AirAsia and an active Twitter user, stirred controversy earlier this year after incorrectly tweeting that Malaysia Airlines Flight 370 had landed safely.

William Waldock, an expert on air crash search and rescue with Embry-Riddle Aeronautical University in Prescott, Arizona, cautioned against drawing comparisons to Flight 370.

The circumstances bode well for finding Flight 8501 since the intended flight time was less than two hours, and there is a known position where the plane disappeared, he said.

The A320 family of jets, which includes the A319 and A321, has a good safety record, with just 0.14 fatal accidents per million takeoffs, according to a safety study published by Boeing in August.

Flight 8501 disappeared while at its cruising altitude, which is usually the safest part of a trip. Just 10 percent of fatal crashes from 2004 to 2013 occurred while a plane was in that stage of flight, the safety report said.