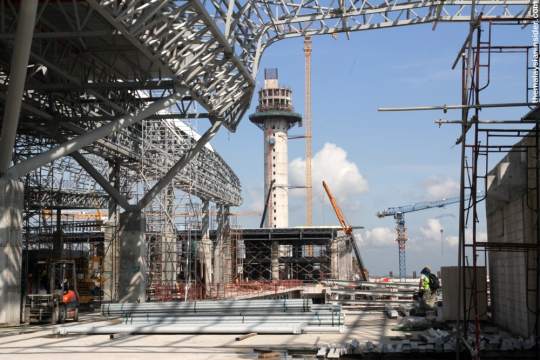 File photo of work on klia2. – Picture by Choo Choy May

Construction of the 257,000sq m klia2 is on track, she said, adding MAHB was working with the contractor to make sure the construction and internal works of the terminal building conclude by May 1.

Faizah said although the commencement date has been delayed to June 28, the two-month grace period would be utilised by the airport operator to perform testing and commissioning activities.

She said klia2 would be launched on June 28, the date chosen by Prime Minister Datuk Seri Najib Razak and coinciding with the launch date of the Kuala Lumpur International Airport (KLIA) in 1998.

Faizah also said retailers can come in in stages while the terminal building is being completed.

“According to the timeline we are able to make it for commencement,” she told Bernama.

She said 82 per cent of the commercial floor space has been tendered, and no more new brands will be entertained.

Asked about Malindo Air‘s plan to begin operations in mid-March, she said MAHB was very happy with the presence of new airlines and welcomes Malindo into the family.

“I think it’s also good for consumers because now they have more choices and I believe that would induce further growth in our passenger numbers,” she added.

The RM4 billion klia2, built to cater for the explosive growth expected in low-cost travel, is envisaged to handle a maximum of 45 million passengers per annum.