“We are now installing the ticketing system at the gates and self-service kiosks,” she told Business Times at a recent railway conference.

The opening date for klia2, which is now a hybrid airport as it will accommodate AirAsia X’s business-class passengers, is May 2, 2014.

ERL has a 30-year concession to operate the KLIA Express and KLIA Transit trains between KL Sentral in Brickfields, here, and KLIA. 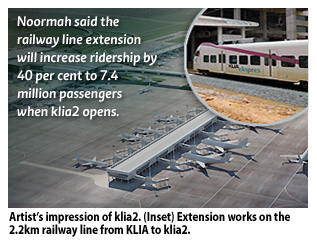 YTL Corp Bhd, which controls ERL, is extending the railway line from KLIA to klia2 for about RM100 million. Work on the extension started in July 2011.

The ERL station at klia2 will be located at Gateway@klia2, the transportation hub-cummall developed by WCT Bhd.

Noormah said the railway line extension will increase ridership by 40 per cent to 7.4 million passengers when klia2 opens.

Business Times reported that YTL is talking to Spanish and Chinese train manufacturers to buy up to four train sets, comprising four coaches each, for RM150 million to serve klia2.

The existing railway line from KL Sentral to KLIA is served by 12 electric high-speed trains.

The trains were acquired from German-based Siemens AG.