Premium air travellers, who previously may have been hesitant to fly via the low-cost carrier terminal (LCCT), could soon be enticed to use the new Kuala Lumpur International Airport 2 (klia2), which is due to open on May 2 next year. 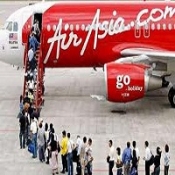 Premium travellers, who see departing from the present LCCT as being inconvenient and uncomfortable, could change their minds when klia2 opens, and this will be a boon for AirAsia Bhd.

"This will be positive in providing an upside to overall passenger yields. In fact, AirAsia has taken the opportunity to offer a ‘Hi Flyer’ scheme tailored to the needs of business and premium passengers, which provides the flexibility of flight timing and express boarding."

RHB Research added that the extra service offering has led to strong take-ups from the business community.

The firm said AirAsia has taken delivery of 11 aircraft, of which five were delivered this month alone, in line with its assumption of an average of six new aircraft for 2013.

RHB Research expects AirAsia to take delivery of four aircraft in 2014 and three in 2015.

In total, the AirAsia group is expected to take delivery of 31 aircraft, although most would be deployed to its associates.

As such, AirAsia will reap the benefits of higher lease rental income.

With loads expected to hover at 78 per cent for 2014-2015 (down by one percentage point from its 2013 assumption), AirAsia should see its revenue passenger kilometre grow by seven and five per cent, respectively.

On its yield outlook, RHB Research said while there may still be pressure on airfare yield, this will be mitigated by the higher ancillary revenue that AirAsia is expected to rake in, notably from the recent revision of its baggage weighing structure and new ancillary initiatives launched, such as "Hi Flyer".

AirAsia’s baggage revision and stricter passenger inspection of cabin luggage have enabled the carrier to garner the highest baggage revenue per pax collected in third quarter 2013 of RM21.30 per passenger. – BT