A Malaysian aerospace and defence company has teamed up with Indonesia’s largest privately-run airline group to set up a new low-cost carrier based in Sepang.

National Aerospace and Defence Industries Sdn Bhd (Nadi) and Lion Air‘s owner PT Lion Grup will form Malindo Airways that could rival AirAsia Bhd and subsequently spark a price war. Malindo Airways is poised to start in May 2013 using the soon-to-be completed klia2 at Kuala Lumpur International Airport in Sepang as its hub.

It will begin with a fleet of 12 Boeing 737-900ER aircraft, before expanding it to 100 aircraft within a decade.

Apart from klia2, Malindo Airways will use Kota Kinabalu in Sabah as its secondary hub.

It plans to offer flights within Malaysia and Indonesia, as well as to Thailand, China, India, Japan and Australia.

Nadi will own a 51 per cent stake in Malindo Airways, while the balance of 49 per cent will be held by the Lion Grup. 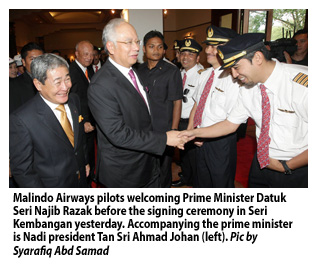 He added that the partnership will also provide the regional low-cost air travel market with healthy competition, ultimately benefitting low-cost travellers in both countries.

"On the part of the government, we will continue to support such intiatives, especially bearing in mind that the ultimate beneficiaries will be the consumers of low-cost travel in particular, and the rakyat as a whole," Najib said.

RHB Research has raised the possibility of a full-scale price war between AirAsia and the newcomer.

"We believe Malindo Airways is eyeing primarily AirAsia’s lucrative domestic market in Malaysia. Theoretically, Malindo Airways, being a new entrant in Malaysia, will go all out for market share at the expense of profits by undercutting prices.

"AirAsia, on the other hand, may also want nip the competition in the bud by dropping fares. This will result in a full-scale price war," the firm said in its note yesterday.

"The agreements signed today will not only help us expand our service offerings, but it provides us the necessary platform and resources to develop human capital that is necessary to fuel the industry in Malaysia as well as throughout the region," he said.

Nadi is a major player in Malaysia’s maintenance, repair and overhaul (MRO) industry.

"The joint-venture will boost Nadi’s MRO operations run by Airod Aerospace Technology, making it one of the largest independent MRO service providers in the region," Ahmad said.

PT Lion Grup president director Rusdi Kirana said the airline will start with a fleet of 12 Boeing 737-900ER. By 2015, it expects to have five new Boeing 787 Dreamliner.

Rusdi dismissed suggestions that Malindo Airways will be competing with AirAsia, the region’s biggest low-cost carrier, in its home market.

"We are not competing, but rather complementing by bringing in more passengers. We are also looking at selling tickets at Air Asia’s pricing, but with value-added services for passengers such as Wifi and inflight entertainment," he said.

Rusdi said Malindo Airways will fly out from few cities in Indonesia such as Medan, Pekan Baru, Makassar, Surabaya and Bali to Kuala Lumpur and Kota Kinabalu. The passengers will then be able to fly to other destinations like to Japan, China and India.

"We will use Jakarta and Bali as hubs for passengers flying from Malaysia to Australia," he said.