Work to extend the Express Rail Link (ERL) to the new Low-Cost Carrier Terminal (klia2) is on target and is expected to be completed by the end of March, said ERL Sdn Bhd chief executive officer Noormah Mohd Noor. 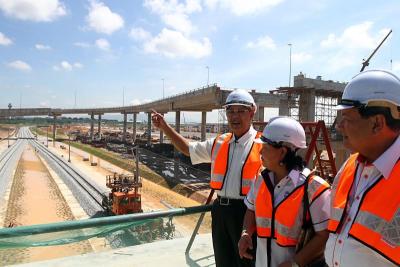 Almost there: Syed Hamid (left) inspecting the ERL line extension project during a site visit to klia2. Accompanying him are Noormah and Azmi.

She said as at October, work to extend the line and services from the Kuala Lumpur International Airport (KLIA) to klia2 was 73% complete.

The project, which began in July last year, involves a 2.14km line extension.

Commercial services are expected to commence on May 1 to coincide with the opening of the new terminal.

“The work is on track and everything is progressing well. The track is 95% complete,” she said at a press conference after a site visit to klia2 yesterday by Land Public Transport Commission (SPAD) chairman Tan Sri Syed Hamid Albar.

Passengers travelling from KL Sentral to KLIA via ERL’s high-speed train (KLIA Ekspres) and its commuter service (KLIA Transit) would not incur additional cost if they chose to extend their route to klia2.

“However, those shuttling between terminals would have to pay RM2,” Noormah said.

Works, she added, were also underway to create a common platform at both terminals for KLIA Ekspres and KLIA Transit passengers for better convenience.

“The journey from KL Sentral to klia2 will take 33 minutes via the express train and 39 minutes with the commuter service.

“The new line extension is expected to increase our ridership by 40%,” she said, adding that their total passenger load for this year was about 5.3 million.

The ERL station at klia2 will be located within the terminal’s integrated complex and includes, among others, a 230m-long platform, escalators, boarding and exit gates and a concourse area with ticketing and operational offices.