Malaysia Airports says klia2 in Sepang will be completed on time and within the budget.

MALAYSIA Airports Holdings Bhd (MAHB) yesterday rebutted all allegations relating to the construction of klia2, stressing that airport charges will remain the same when the new low-cost carrier terminal opens for business.

The airport operator said klia2 in Sepang will be completed on time and within the budget. It also said airport charges at the LCCT will remain as they are until the government revises them according to the stipulated schedule.

Currently, the airport tax at the LCCT is RM6 for domestic flights and RM32 for international flights. 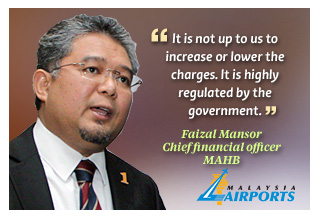 MAHB chief financial officer Faizal Mansor said the KLIA cost will remain at RM4 billion and the terminal will be completed on April 2013 as planned.

"As far as MAHB is concerned, when klia2 is completed in April 2013, the airport tax will remain as it is," he told reporters at MAHB’s media briefing on its second quarter financial results yesterday.

AirAsia Bhd group chief executive Tan Sri Tony Fernandes had recently posted in his blog that the cost of klia2 will swell to RM5 billion, expressing concerns that this would result in higher airport charges.

"So it is not up to us to increase or lower the charges. It is highly regulated by the government."
He said the airport tax is revised every five years by the government and the next revision will be in 2014, adding that airport charges in Malaysia are the lowest in the world.

When an airport is built, he said, MAHB takes into consideration the requirements of the government and airlines.

"Should the requirements change, the scope of work changes, and it may result in a cost increase," he said.

It also recorded a passenger growth of 4.2 per cent in the first half of 2012 with a total of 32.5 million passengers. Both international and domestic passenger movements registered moderate growth of 5 per cent and 3.5 per cent respectively. 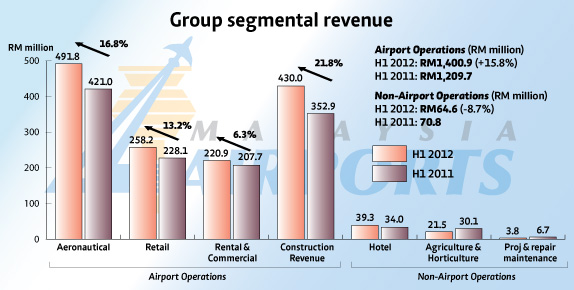