AirAsia founder Tony Fernandes is stepping out of Malaysia – literally – and relocating to Jakarta to spearhead the airline’s regional growth. 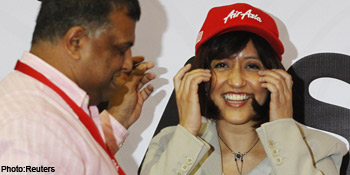 Meanwhile, he has named Aireen Omar, the budget carrier’s former regional head of corporate finance, treasury and investor relations, as the chief executive of the Malaysian operations.

Mr Fernandes remains group chief executive of AirAsia but, together with his deputy and co-founder Kamarudin Meranun, he will relocate to its new Asean office in Jakarta to spearhead regional strategies. The airline’s focus during its first decade was largely domestic, he said at a news conference in Sepang yesterday. Its next stage of growth would be regional.

Mr Fernandes added that the airline is convinced it is "ideally positioned to reap huge dividends" by serving an under-served market of three billion across Asean, North-east Asia and South Asia.

Moving to Jakarta where the Asean Secretariat is located puts some distance between Kuala Lumpur and day-to-day operations.

It also allows 38-year old Ms Aireen – who will also be appointed an executive director of AirAsia – to run the show locally out of the shadow of the aggressive tycoon, who in a decade transformed a two-plane outfit into the region’s largest budget airline.

"She might look sweet and have nice hair, but she’s no little Red Riding Hood," Mr Fernandes said of his local successor, who has been with AirAsia for seven years and is reputed in the sector to be "one of the best negotiators".

"I know I have big shoes to fill," she said. Her priority areas would be maintaining the carrier’s market leadership and costs, she said, as well as preparing for 2015 when Asean implements an open skies policy.

Asked what main skills she would bring as new chief, the occasionally abrasive Mr Fernandes chipped in: "Diplomacy!"

Indeed, in the near term, she will have to oversee the airline’s move in April next year to the new RM4 billion (S$1.6 billion) budget terminal klia2 and deal with the attendant issues.

She will also have to advance talks with national carrier Malaysia Airlines on a previously touted comprehensive collaborative framework (CCF) which appears to be diminishing in importance by the day following the scrapping of a proposed equity swap with AirAsia.

Although procurement, components, maintenance, repair and overhaul (MRO) and training were areas mooted for possible collaboration and savings under the CCF, Mr Fernandes indicated that MRO and training were off the table, ostensibly because of the bad blood between him and the MAS unions whose strenuous objections to the proposed share swap led the government to call it off.

Mr Fernandes appears to consider it a blessing in disguise now since it allows the airline to concentrate on its regional and global ambitions without being weighed down by the operational and financial problems at MAS.