The country's gross domestic product (GDP) growth is expected to grow 5% on a year-on-year basis with domestic demand, in the form of private consumption and investment, to support growth in the quarters ahead despite lower exports and external uncertainties.

AmResearch Sdn Bhd director of economic research Manokaran Mottain said in a report that a 5% growth would be sustainable supported by the implementation of the Economic Transformation Programme (ETP)projects that had been announced last year as well as a further roll-out of new projects identified for this year.

He said in the worst-case scenario, GDP growth could range between 4% and 4.5% should the euro zone crisis lead to a systemic failure in global financial markets and developed countries falling into a recession. 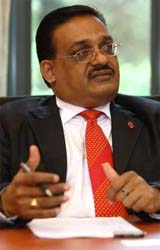 Manokaran: In the worst-case scenario, GDP growth could range between 4% and 4.5%.

“Fiscal policy will also play an important role in the country's performance, though the Government is still committed to prudence management without destabilising growth momentum,” Manokaran said.

Manokaran said the implementation of the ETP projects would encourage growth across other sectors of the economy with the multiplier effects to be seen in the construction and manufacturing sectors.

“As activities in these sectors increase, higher employment and income prospects will further push domestic demand and thus, overall GDP growth is expected to rise in tandem,” he said.

Although there would be broad-based growth, Manokaran said services would expand by 6.2% supported by the increasing demand coming from the implementation of many ETP projects this year as well as strong private consumption, steady intra-Asian trade and increased tourist spending.

He said the manufacturing sector would likely see a more apparent slowdown, due to the impact of a weaker external demand and estimated the sector to grow by 3.6% while the construction sector was projected to grow 8.1% on the back of the Mass Rapid Transit, klia2 and development programmes in rural areas.

Manokaran said lower inflation levels (estimated to be between 2.5% and 3%) as well as favourable labour market conditions would also help to provide further support on the back of the potential decline in external demand.

He said Bank Negara might not cut the benchmark overnight policy rate (which stood at 3%) this year given the robust levels of GDP growth as well as the potential threat of rising inflation (due to continued rise in food price inflation).

Manorakan expects the ringgit to end the year at 3.10 to the US dollar on the back of the reduced risk appetite among foreign and local investors.

“Despite this, we remain optimistic that the appreciation trend will likely regain traction in 2012.

“Notwithstanding the recent depreciation, most currencies in the region continue to be deemed as undervalued, given the relatively strong growth potential as well as robust levels of private capital inflows,” he said.